Buchan Hill, the home of Cottesmore, stands just outside the hamlet of Pease Pottage which lies halfway between London and Brighton.

Pease Pottage has been a travellers rest stop for centuries, as it remains today with its Marks and Spencers Food and a complement of pubs. It was named after a nourishing broth, pease pottage, once almost the national dish of England. A 16th century chronicler records that 'pottage is not so much used in all Christendom as it is used in England'. 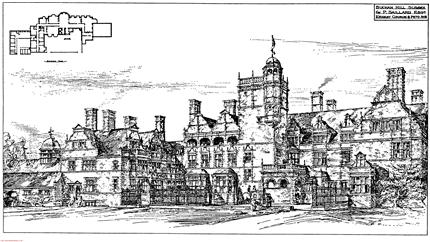 We must imagine that on one of many stops at Pease Pottage on his way to visit relations on the Sussex coast, Philip Feril Renault Saillard, a rich merchant from London first decided to build himself a country house. He eventually selected Buchan Hill, a bare prominence with a fine view surounded by rough woodland, as the site of his house. It was to be the heart of a palatial estate of over 1,000 acres, complete with tenants, a home-farm for fresh produce, a separate stable block for carriages, lakes for fishing, woods stocked with reared pheasants and a walled garden that would employ six men to furnish the house with flowers, fruit and vegetables.

Buchan Hill is described in Mark Girouard's The Victorian Country House as 'Large and florid, and everything that a Victorian manor should be; in a cheerful combination of hot red brick and yellow sandstone, with a large tower, fancy gables, much early Renaissance ornament and an external top floor loggia (for use as an orangery), and baronical fireplaces, a minsterel's gallery, oak carving, an embossed leather walls and rich panelling to the heart's content in the interior.'

The 1870's saw one of the more bizarre marketing opportunities even for the entrepreneur of the Victorian era. There was a boom in ostrich feathers, used for elaborating the hats and corsages of ladies of the period.

One of the beneficiaries was a gentleman called Saillard who actually farmed ostriches in South Africa.

Late in the decade two things happened. Fashions changed in a cloud of discarded ostrich down, and one of Mr Saillard's ostriches died.

Although Mr Saillard's enterprise was down to it last wishbone, so to speak, he was still interested enough to seek the reason for the demise of the unfortunate bird: it had a diamond stuck in its throat.

Ostrich feathers may have ceased to be a girl's best friend but diamonds certainly weren't going to share the same fate. After locating the area where the ostrich had found its carboniferous lunch, he made a very quick fortune, came home and built Buchan Hill.