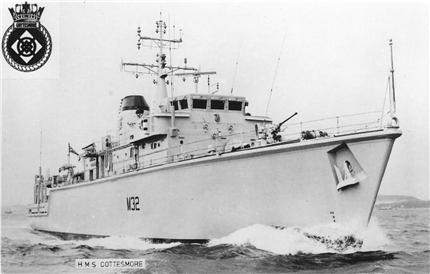 The first HMS Cottesmore was a 750 ton ‘Hunt’ class minesweeper, built at Bow Maclachlan's Thistle Works in Paisley. Laid down In July 1916, she was launched 9 February 1917 and commissioned 14 May that year. She was the fifth of a twenty-strong class sometimes known as the 'Early Hunts'. The successful design paved the way for a further 131 'Later Hunts', otherwise known as the Aberdare Class Minesweepers.

She had a complement of 71 officers and ratings, and was armed with two 12-pdr guns and two 6-pdr guns. Coal fired boilers provided 1800 horsepower to twin screws, giving her a maximum speed of 16 knots.

The first Cottesmore saw service with the Queenstown Minesweeplng Flotillas off the Irish Coast, then in the North Sea based at Granton in the Firth of Forth. After the Great War, she continued to sweep for both German and British mines, finally being paid off in November 1919, and being sold for scrap in January 1923.

The second ship of the name was a ‘Hunt’ Class Type 1 Destroyer displacing 1000 tons. Built at Messrs Yarrow & Co on the Clyde, she was laid down 12 December 1939, launched 5 September 1940 and completed 29 December that year.

This second Cottesmore was armed with four 4" guns in two twin mountings, four 2-pdr guns and two 20mm AA guns. She also carried 50 depth charges, deployed via a depth charge rail and two throwers, and had a complement of 147 officers and ratings.
She served with the 21st Destroyer Flotilla at Sheerness throughout the Second World War, escorting East Coast convoys, offensively patrolling and providing support for Coastal Forces. Along with other Nore Destroyers, she was tasked to intercept the German Battlecruisers Scharnhorstand Gneisenau during the Channel dash of 1942, but owing to poor visibility, was unable to make contact.

On 28 July that year, along with HMS Calpe, she engaged two German armed trawlers off Cherbourg. V202 was sunk, and V203 was severely damaged. Cottesmore was undamaged, but three men were injured during air raids later in the day.

Cottesmore’s next significant action that year was In October, as Senior Officer of a 5-strong destroyer group, she sank the German raider Komet five miles off Cap de la Hague on the French Coast.

On D-Day, 6 June 1944, Cottesmore was tasked with Convoy G2, escorting the 18th Minesweeping Flotilla to Gold Beach prior to the assault. She then lay off the beaches providing Naval Gunfire Support to the Army ashore. After the initial landings, Cottesmore remained stationed at Portsmouth, escorting re-enforcement convoys and patrolling the Normandy Coast.

In November 1944, with HMS Garth, she escorted the monitors Erebus and Roberts while they engaged shore batteries at Walcheren, and then escorted British Minesweepers to Cuxhaven. Subsequently, she joined the Harwich force, and with the war over, she returned to Portsmouth.

In February 1946, she passed into reserve at Devonport, and was sold to the Egyptian Navy in 1950. Undergoing several name changes in Egyptian hands, she served as Ibrahim el Awal, Mohamed Ali and finally Port Said, and when she was hulked in 1988 she was the last surviving ‘Hunt’ Class Destroyer.

The third ship to bear the name was, like the second Cottesmore, built on the Clyde by Yarrow Shipbuilders. A ‘Hunt’ Class Mine Countermeasures Vessel displacing 750 tons, she was launched 65 years almost to the day after the first HMS Cottesmore, on 9 February 1982. The ‘Hunt’ Class Mine Countermeasures Vessels were the first ships in the world to be constructed from glass reinforced plastic, and had a complement of thirty-five.

She was armed with one 30mm gun and four 7.62mm General Purpose Machine Guns, and during her 22 year lifespan, carried out two main functions. Serving with the 1st, 2nd and 3rd Mine Countermeasures Squadrons, she spent most of her career in her original role as a minesweeper, using advanced sonar and command systems to detect and destroy mines. In 1998, she was refitted, her minesweeping equipment being removed and two large boat davits being placed on the sweep deck. This was for her role as a Northern Ireland Patrol Vessel, a role she conducted along with HM Ships Dulverton and Brecon until early 2005.